Context
Cille Pheadair provides one of the earliest recorded forms of a church in Uist, occurring in a charter in 1309 as Kilpedire Blisen. MacDonald (2010, 253) argues that this may be a mis transcription since another copy of the charter gives it as Kilpeddir Clisten. However, since the original charter does not survive and the form Blisen needs to be treated with considerable caution. Monro (1884 (1549), 48) refers to the parish as ‘Peiter’s parochin’. Today the name refers to the settlement rather than the church site which explains the distance between Cille Pheadair and Cladh Pheadair on the map. The name of Cladh Pheadair still survives and is probably closer to the original church site, but according to the 1928 RCAHMS survey ‘no trace of this burial ground is now visible’.

Discussion
The exact location of the original church site remains uncertain. OPS states that ‘The church, apparently dedicated to Saint Peter, stood at Kilpeter on the west coast of the parish’ which would be consistent with the location of the churchyard. The tradition that the church was ‘washed into the sea or buried in the sand’ has been discussed by Raven (2005, 170-1) who concludes that ‘The structures were still said to be visible in 1867, four to five hundred yards from the shore (CWP 362, 220). However, the possibility of an earlier church being washed into the sea or buried in the sand should not be entirely discounted’. The tale would certainly appear to be of a relatively old date since it appears in one of Pont’s (ca. 1583-1614) texts, albeit in a rather confusing version (see picture):

The oldest men report thir Ile to be much empayred and destroyed be the sands ovirblowing and burieing habitable lands, and the sea hath followed and made the loss irrecovarable. ther ar destroyed the townes and paroch churches of Kilmarchir moir and Kilpetil, and the church of Kilmorrie [?Kilmonie] is now called Kilpetil, that is the church of the muir, for so it lay of old neerest the muirs, but now the sea and the sands have approached it. there be sum remaynes of the destroyed churches yit to be seen, at low tyds or ebbing water. 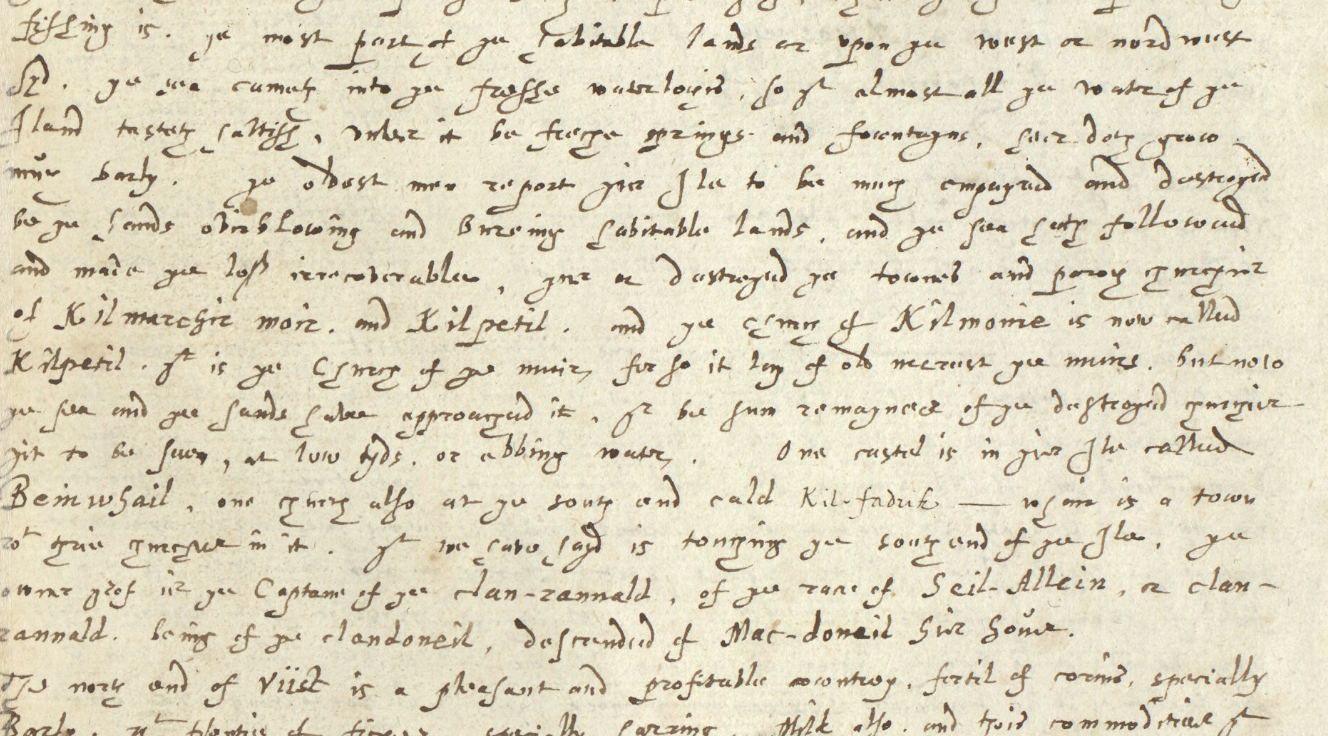 The reading of Kilmorrie [?Kilmonie] is particularly problematic: Pont states that its meaning is ‘the church of the muir’ which could allow for an interpretation with G cill ‘a church’ + G monadh ‘a moor’. On the other hand, as suggested by Raven (2005, 171), if the word should be read as Kilmorrie, Pont may refer to Sc mure (muir, mor, moir) (DSL) and reveal ‘a lack of an understanding Gaelic’. If this is the case, the name should more likely be interpreted as G cill ‘a church’ + G mòr ‘big’ or pn Moire (St Mary). Parker Pearson et al. (2018) propose that Kilmarchir moir refers to Machair Mheadhanach (NF741457) located west of Loch Bì and that Kilmonie refers to the site at Dùn na Cille. However, Pont’s account implies that it was the church of Cille Pheadair which was formerly known as Kilmonie, but this is equally confusing since the dedication to Peter dates back to at least the early fourteenth century. Thus, if the name Cille Pheadair superseded a *Kilmorrie, that name would be of considerable antiquity, at the very least three centuries before Pont wrote his account. A similar tale is recorded in MacFarlane’s Geographical Collections (1906 (d. 1767), 180) (see below), but it is likely that this story ultimately derives from Pont since this is one of the sources used in the collections.
The lack of any structural remains and the universality of St Peter makes it difficult to provide any dating for this site, other than that it must have pre-dated the fourteenth century (but see Peadar for more information about this saint). Being an independent parsonage before the Reformation, by which time it ‘had been annexed to Iona’ (MacDonald 2010, 253), it is similarly difficult to establish religious or political affinities. On the other hand, Cille Pheadair lies near several key sites which should be further considered in the context of early Christianity in Uist. Firstly, Cladh Pheadair lies roughly 1km north of the burial cairn of an adult woman dated to AD 640-780 (also known as ‘Kilpheter Kate’) and a Norse farmstead (AD 945-1245), both of which have been extensively discussed by Parker Pearson et al. (2018). If the foundation of the church was contemporary with, or pre-dated, the Norse period of settlement was there a connection between them? At the very least, the proximity of the sites would indicate some contact, particularly considering the relatively long time frame for the Norse settlement, the exact nature of which must remain open to speculation.

Secondly, Cladh Pheadair is located ca. 1km from Loch Dùn na Cille (and by extension Dùn na Cille), with the settlement of Cille Pheadair being even closer (on the bank of the loch). A relationship between the sites does seem likely and in this context it may be significant that location of Cille Donnain has a similar context, being located ‘on a promontory on the western edge of Loch Kildonan’ (Fleming and Woolf 1992, 329; also see Raven 2005, 172-3). This coupled with a potential pairing of dedications to Peadar and Donnan in Scotland may indicate a relationship between the sites (see Peadar). Here it is important to note that Cille Donnain appears to have had strong Norse links and should be viewed as having operated within a Scandinavian political world during the medieval period (Clancy 2015; Fleming and Woolf 1992). Further, as demonstrated by Parker Pearson et al. (2018, 1.1) clusters of Norse settlement can be found in close proximity with Cille Pheadair, Cille Donnain and Cill Amhlaidh, Cill Amhlaidh of course having obvious Scandinavian associations since the saint commemorated is a Norse one. The possibility that Cille Pheadair should be viewed in the context of a Norse-dominated political world during the Scandinavian period of settlement should therefore be considered. Additionally, the combined evidence found at and around Cille Pheadair appears to reflect a site of considerable importance and raises the real possibility that we are looking at a relatively early site with pre-Norse origins.

Other sources
MacFarlane’s Geographical Collections (1906 (d. 1767), 180): ‘There was ane Ancient man in a toune in Wist called Killpettill and this old man said that he was sex or sevinscoir of years old and he did sie another church with the lands of the Parish wherein that church did stand. And these lands were more profitable fertill and pleasant then these that are in Wist now. And that his father and mother, his grandfather and Grandmother did see another parish Church which was destroyed with the sea long agoe. And that they did call that Church Kilmarchirmore The next was called Killpettill, And this Church wherein he doth dwell now into, was called Killmony which is now called Killpettill that is to say the Mure Church, because it lyeth next the Mures.’

OPS, 365-6: ‘The church occurs in record as that of Kilpedire Blisen in 1309, at which time it was probably in the advowson of the crown. In 1392 it appears to have been included in a grant of the island of Huwyste made by John of Yle to Reginald his son, and confirmed by King Robert III. In 1561 it belonged to the abbot of Ecolmkill, the bishop of the Isles having one-third of the parsonage […] The church, apparently dedicated to Saint Peter, stood at Kilpeter on the west coast of the parish.’