Context
Located on the western coast of North Uist, south-west of Hogha Gheàrraidh, the site of the medieval parish church of Kilmuir reflects an area with considerable evidence for medieval Christian activity, both in terms of archaeology and onomastic evidence. The original church is believed to have been located on the hillock where the churchyard is now located (RCAHMS 1928, 49), but no trace of it now remains. The ruins of the church located west of the churchyard, just below the hillock is the parish church which was built in 1764 (OPS, 373).The parish of Kilmuir would have included the larger part of North Uist, the other parish being Sand, where St Columba’s Chapel is located. These appear to be the two parishes mentioned by Monro in 1549 (OPS, 373, 376). Several place-names that demonstrate church activity surround Kilmuir, including Cladh Chothain, Eilean Trostain, Loch na Cille, and Paible. Watson (2004 (1926), 259) also records that there was a Comraich na h-Eaglais ‘The Sanctuary of the Church’ at Kilmuir indicating ‘the privilege of sanctuary once enjoyed by certain churches within a definite radius’.

The graveyard contains an impressive number of early medieval Christian stones. These include: a rectangular slab of gneiss with an equal-armed cross-potent, a cruciform stone of dark gneiss (see top picture), two cruciform stones of dark gneiss, two disc-headed slabs, and a cross (see bottom picture) (Fisher 2001, 109-10). Martin (1703, 59) also writes that: ‘There is a Stone in form of a Cross in the Row, opposite to St. Mary’s Church, about 5 foot high’, but none of the now surviving stones are obvious candidates. Carmichael (c1872) gives a local tradition which asserts that Kilmuir was built by Una, daughter of Rìgh Lochlann: ‘Una built an Kille moire Howgeary.’

Discussion
There is no doubt that the general area of Kilmuir was one of some importance during the Middle Ages considering its status as a parish covering most of North Uist. Fisher (2002, 43) argues that the early Christian crosses in the north-west coast of North Uist are likely to be of a 10th-11th-century date and, thus, it is likely that there was a church at this site by this date, considering the large number of sculptures here. However, the early context of the site and the chronology of the dedication to Mary are more obscure. Perhaps the most surprising characteristic of Kilmuir is the complete absence of early map forms recording any church in this area. Major parish churches such as St Columba’s Chapel and Cille Pheadair were usually recorded at the very least by Blaeu (1654), and sometimes earlier than that. However, a Kilmorie in Vyist appears in an obligation from 1575-6 along with Kirkebost, Carinche (Càirinis), Illera, and Halskienagallechie (Na h-Eileanan Monach), making it probable that it is the Kilmuir in question. One explanation for the comparative lack of early forms could relate to land ownership. Around the time after the Reformation when many of the earliest surviving maps of Uist were made, the parish churches mentioned above had been brought into the sphere of Iona and the bishop of the Isles, unlike Kilmuir. It is notable that by the Reformation three of the five parsonages in Uist (Clachan Sand with St Columba’s Chapel, Kilpeter, and Howmore) pertained to the abbot of Iona (MacDonald 2010, 116-7). Additionally, both Baile nan Cailleach and Teampull Chaluim Chille in Benbecula had clear ties with Iona. As a result of not being part of this network Kilmuir might have slipped under the radar of the early mapmakers.

The relationship between the church of Kilmuir and the nearby sites should also be considered. Were they separate entities from Kilmuir or connected? Do these sites reflect different chronological layers of the same ecclesiastical sphere? Both questions are very difficult to answer, but some observations can be made and have, to some extent, already been considered by other scholars. Beveridge (1911, 295) believed that Loch na Cille could not be a church site due to its proximity to the parish church. It has been argued that this ‘may not be correct, but there is nothing further to substantiate a church or chapel in this location (Papar Project). Thus, the possibility of a church site at Loch na Cille should perhaps not be readily excluded. However, it is important to note that a place-name containing G cille ‘a church’ as a specific does not necessarily indicate the presence of an actual church in the immediate vicinity. Loch na Cille could just as likely have belonged to (or in some other way have been related to) an ecclesiastical establishment, Kilmuir perhaps being the most likely candidate.

The suggestion that if Cladh Chothain’s ‘dedication was to St. Choan or St. Comgan, then it may also be of early date, perhaps predating Cill Mhoire’ (Papar Project) is an intriguing one, but is very difficult to substantiate. Importantly, we should not assume that a dedication to Mary, although increasingly popular in the later Middle Ages, excludes the possibility of an early dedication. Clancy and Márkus (1995, 33-4) have demonstrated that dedications to St Mary existed from at least the 8th century: ‘Iona’s devotion to the Mother of God is manifest in the images of herself with her child on two of the eighth-century crosses of Iona’ and may have partially been the result of the efforts of Pope Sergius (d. 701) ‘who formally established her four great feasts in the calendar of the church’ (also see Butter 2007, 135).

Unlike several of the surrounding sites which were clearly associated with Iona by at least the 16th century, including *Kirkibost, Teampull na Trionaid, and Teampull Chriosd (MacDonald 2010, 159), there is no evidence of this being the case here. However, Kilmuir appears to be included in an obligation from 1575-6 by ‘James M’Donill’ to the Bishop of the Isles where it is listed as ‘the personage of Kilmorie in Vyist’, indicating some degree of patronage of Iona. It is also entirely possible that there was an early, pre-Viking age, association with Iona, a connection which could have ensured its rise to prominence. Ultimately, based on the currently available evidence, a relative chronology of Cladh Chothain and Kilmuir cannot be established. Nevertheless, this discussion serves as a reminder of the importance of not assuming that dedications to native saints are inherently earlier than international ones.

Other sources
Martin (1703, 59): ‘There is a Stone in form of a Cross in the Row, opposite to St. Mary’s Church, about 5 foot high: the Natives call it the Water-Cross, for the antient Inhabitants had a Custom of erecting this sort of Cross to procure Rain, and when they had got enough, they laid it flat on the ground, but this Custom is now disused.’

OPS (372-3): ‘This parish [Kilmuir] probably included the greater part of the island of North Uist, and the smaller islands, Rhona, Gremsay, Illeray, Kirkebost, Husker, Valay, Boreray, and Orinsay. The district of Sand, now included in the parish of North Uist, formed a separate parsonage […] The church of Kilmuir appears to have been included in the grant of the lands of Uist made in 1392 by John of Yle to Reginald his son, and confirmed by King Robert III. Archdeacon Monro in 1549 mentions two parish churches in the Kenthnache [?Ceann Thuath] or North Head of Uist, but names neither […] The church, dedicated to Saint Mary, stood at Kilmuir (apparently the Balchenglish of Blaeu) near the centre of the united parish. The present church of Kilmuir was built in 1764. Part of the glebe was of old a sanctuary, and bears the name of Shead Phoil (Paul’s field).’

RCAHMS (1928, 49) Cill Mhoire (site of), Hougary: ‘Round the summit of a slight hillock about 600 yards south-east of Hougary, is the kirkyard of Kilmuir, still in use, in which is probably the site of the ancient church Cill Mhoire, all traces of the building having been obliterated.’ 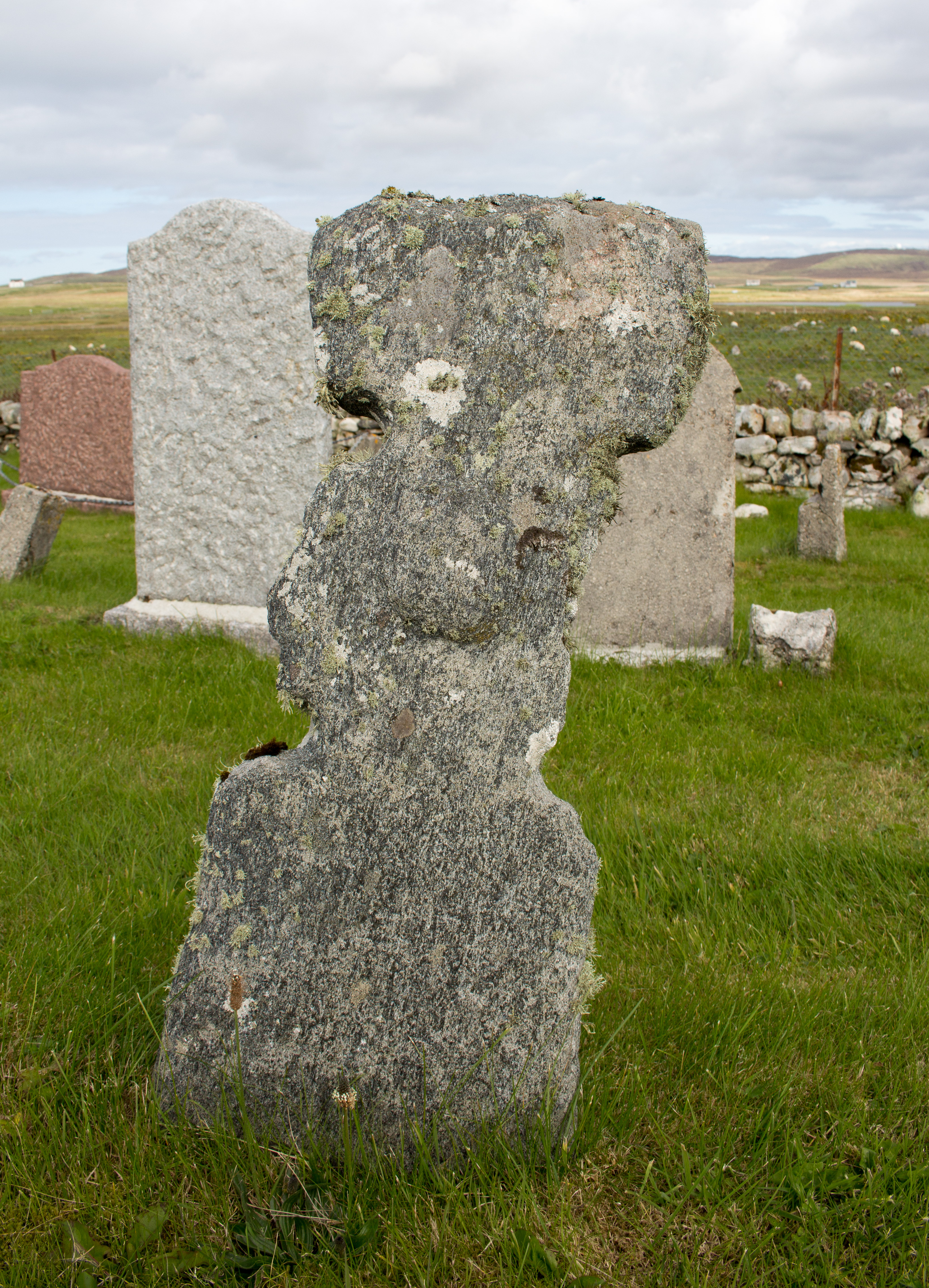 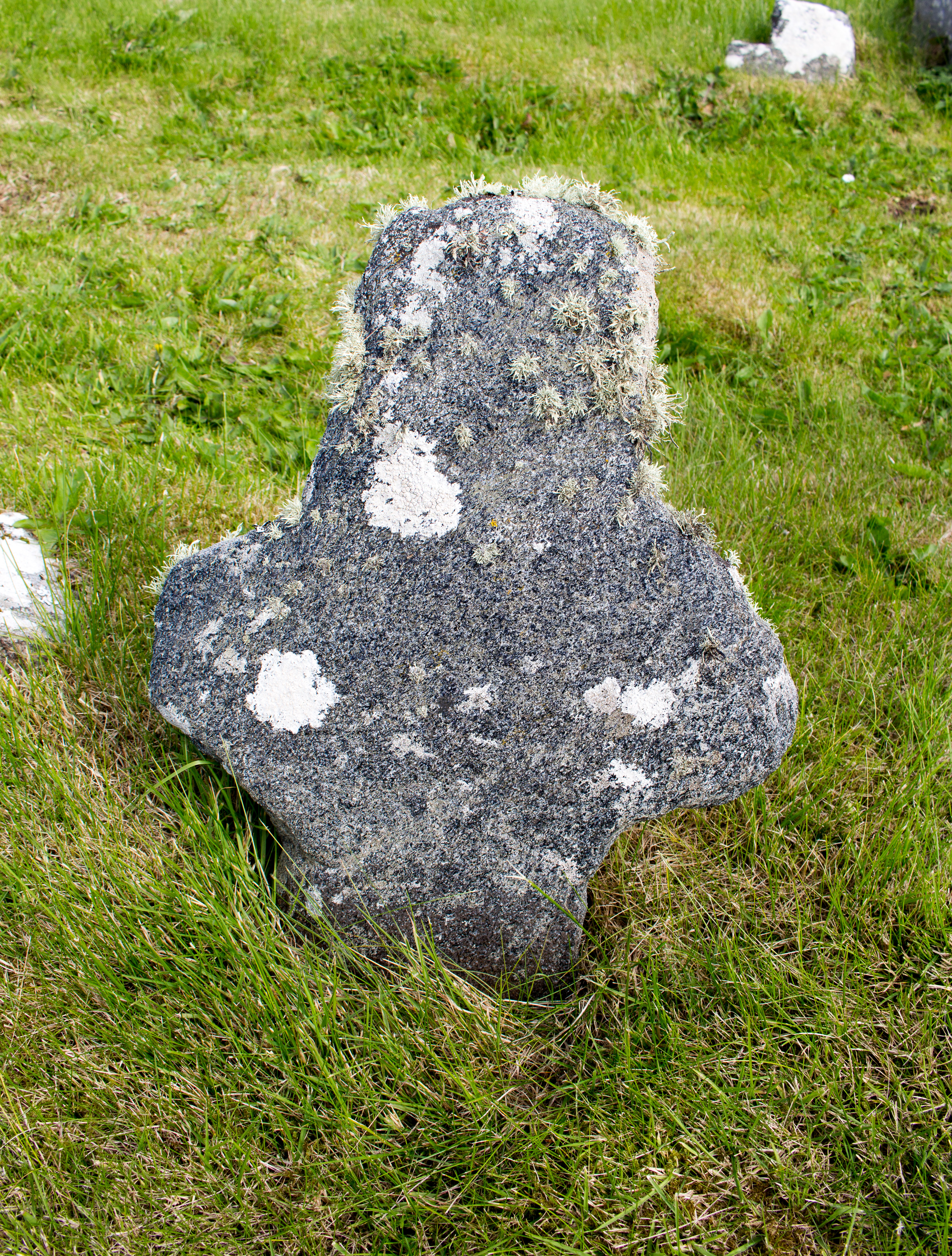