Context
According to the OSNB (OS1/18/13/122) Beinn Ruigh Choinnich ‘Signifies “Kenneths Hill”, and applies to a bold rocky hill Situated on the north Side of Loch Boisdale’. However, when considering early map forms, several other names appear. Both Blaeu’s Bin Kilochaine (for *Kilchainie) and Thomson's  Ben Gillykenich clearly suggest the presence of a *Cill Choinnich on the slopes of this hill. This is supported by the entry in the OSNB (OS/18/12/72) for Cladh Choinnich, for which the entry reads: ‘It is traditionally Known that there once stood a Chapel, and burying ground where marked on plan. But there is none now living who can point out with Certainty the exact spot. This name is now well authenticated and the Site has been shown on plan’. The site in question is found at NF796199. Based on this, the early forms suggest at least three names associated with St Cainnech here: *Cill Choinnich, Cladh Choinnich, and Beinn Ruigh Choinnich.

Discussion
The location of a church site poses some problems. Both the modern and OS 6-inch  maps record Chapel and Cladh Choinnich (Site of), but at the time of compiling the OSNB  there appears to have been doubts as to the exact location considering the statement ‘there is none now living who can point out with Certainty the exact spot’, but they later go on to state that the name is ‘now well authenticated’, marked on the OS 6-inch  map at NF796199. On the other hand, Mac Iain (1888, 111)  writes that a church dedicated to ‘St Kenneth’ was located at Aurotote, modern day Oratobht, located almost a kilometre north-west of the site marked on the map. It is worth noting that the existence of a church-site dedicated to St Cainnech has gone largely unnoticed (or at least unacknowledged) in previous scholarship and there appears to be no physical evidence of a church.

Watson (1926, 276) presumably refers to this site (or is it Aird Choinnich?) when he states that ‘His churches are Kilchenich in Tiree, Kilchenzie for Cill Choinnigh in Kintyre, Coll, and South Uist.’ Watson also refers to the story in Vita sancti Cainnici where ‘he dwelt in a desert place at the foot of a certain mountain in Britain, but the sun did not shine on it owing to the hill coming between’. Could there be any association with this tradition and the two possible dedications to this saint in Uist? Although there are possible other instances of hagiotoponyms containing ruigh, it is not a commonly occurring element. DoSH records four instances of  G ruigh in potential hagiotoponyms: Ruighe Uradain (Inverness) (probable hagiotoponym, but possibly reflecting  G suidhe ‘seat’ as the generic), Ruighean Thomais (Assynt) (doubtful hagiotoponym), and Ruidh Moraig (Blair Atholl) in addition to Beinn Ruidh Choinnich. The occurrence of this element in association with a saint who has a miracle connected with a feature which might be described as ruigh makes this an intriguing possibility. This does not necessarily reveal anything about the chronology of the name and the association could have been made at a relatively late date, but it could explain the use of ruigh in a dedication to Cainnech.

Considering the context of St Cainnech and local traditions in Uist (see Aird Choinnich), there is almost certainly interpolation and later developments reflected in these names. However, the early forms strongly indicate that there was indeed a church located here.

Other Sources
‘the hill of the north side of the entrance to Lochboisdale is named Ben Kenneth, a name which it derives from the aforementioned St. Kenneth, who officiated occasionally in a church which then stood at a place called Aurotote, near Lochboisdale Hotel.’ Mac Iain (1888, 111) 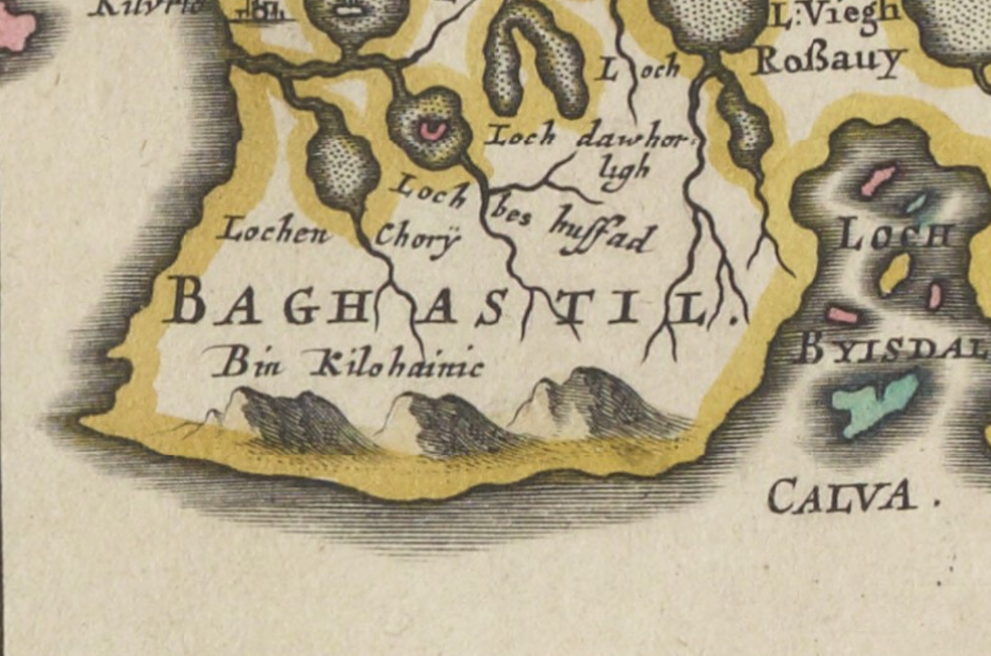